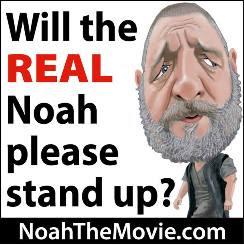 I reluctantly went to see Russell Crowe’s Noah, and justified paying Paramount (the producers of the blasphemous “The Wolf of Wall Street”) the cost of the ticket because a popular television program had invited me to share my thoughts.

Noah’s producer, Darren Aronofsky, once said, “All of my charity work has always been about the environment,” so I can understand why he thought that the biblical narrative is about saving innocent animals. But what was he thinking when he had Noah build the ark with the help of a rock
group?

These embarrassingly absurd rock people stomp around almost every scene of the first half of the movie. From a production viewpoint, I expected better and more sensible motion graphics for such a big budget movie.

From a biblical viewpoint Noah himself is about as far away from the Noah of the Bible as he could get. Perhaps the best way to describe him and what he does in the movie would be to liken it to Hollywood doing a movie about Napoleon, and portraying him as a tall Japanese-speaking crocodile hunter, who was into sky-diving and Russian roulette.

However, there’s something more sinister about the production of this movie. It’s more than just a grown man with a childish imagination playing with an expensive toy. It is the blatant mischaracterization of a man of God in an attempt to undermine the authority of the Word of God. If Hollywood’s “Noah” is a financial success, I suspect that a sequel will be a blasphemous mischaracterization of Jesus and His work on the cross. As with “Noah,” this will be given a pass by many professing Church leaders who are mesmerized by the glitter of Hollywood. These are dark times indeed.

Yet my fading hope is that if Hollywood ever sees fit to portray another biblical figure, they will get it right. They can have their poetic license, but they must stay faithful to the script revealed in the Scriptures. If they do that, I will encourage Christians everywhere to flood the theaters, and I’m sure I’m not alone in that conviction.

In the meanwhile, I am encouraged that over 100,000 people freely saw our version of Noah within the first two days of its release. May those who have a Noah craving get their fix at www.NoahTheMovie.com.